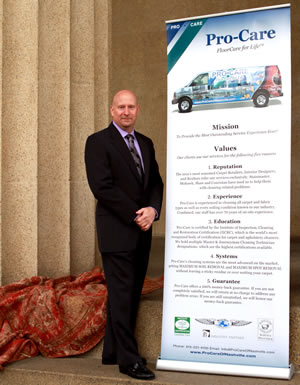 In 1994 Jim Kilpatrick set a goal to establish a service business in the area where he lived. After consulting with people about a variety of businesses, Jim settled in on the carpet care business. He chose carpet care primarily because it was viewed as a service industry needing professional attention and requiring integrity and honesty in order to grow and succeed. Jim spent six months researching the market, and by December 1994 had written his five-year business plan.

In January 1995, Bridgepoint, a national distributor of carpet care products, opened a branch facility in Nashville. Over the next 5 months, Jim was able to acquire the equipment, supplies and some certification classes through Bridgepoint. He also hired his first employee who was attending one of the classes during that same time.

In June 1995, Pro-Care served its first customer, and by the end of the year 2000, its fifth year in business, the client list had grown to more than 800.

Starting in the fourth year of operations, in keeping with Jim’s five-year business plan, he was openly looking for the right person to take over Pro-Care. At that time he met John R Browning, III who had recently established his own fledgling carpet care company. Before John started Browning Carpet Cleaning Inc., in July 1997, most of his experience came from working in his father’s carpet care business. John purchased Pro-Care in February 1999, which allowed him to secure the experience of trained technicians as well as an established customer base. Jim was satisfied that he had found someone who would practice the same high quality and honest business principles he himself had fostered since Pro-Care’s beginning, five years earlier.

After the sale, Jim continued to work with John as a consultant through the year 2000, introducing John to customers as their need for services arose.

John has continued the successful growth of Pro-Care. Pro-Care is also recognized throughout the country as one of the most educated, experienced and organized floor care companies. John continues to be invited each year to participate in training sessions, brain storming sessions and seminars with the leaders in our industry. 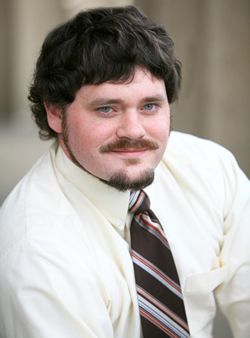 Throughout his career, Trey Moon has built a strong knowledge base as a fine fabric and textile cleaning specialist.

Trey began by working in the dry cleaning industry for six years while in high school and college. This laid an excellent foundation for learning about the various fiber types in fine clothing. In 2005, he joined Pro-Care and earned his first Institute of Inspection, Cleaning and Restoration Certification (IICRC). Since then he has worked with virtually every fiber type and soiling condition known in the industry while providing outstanding service experiences to middle Tennesseans.

Meticulous attention to detail made Trey a prime candidate to become Rug Plant Manager at Pro-Care. He was trained in the cleaning of specialty rugs by industry authority Ruth Travis. He also apprenticed under Ms. Travis for more than a year and a half before taking over management responsibilities in Pro-Care’s Rug Plant. As a WoolSafe approved fabric care specialist, Trey uses the most advanced cleaning methods available.